The transfer at Frankfurt airport was relatively short, by the time I went through passport control and security again and transferred between the B & A gates, the flight to Vienna was already boarding so no time to try out an airport lounge this time! 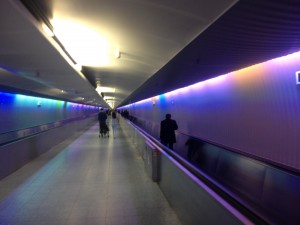 B to A Transfer Tunnel at Frankfurt 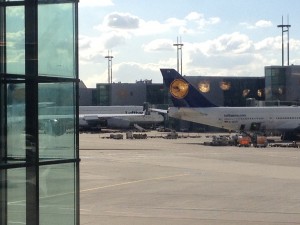 Lufthansa A380 in the background 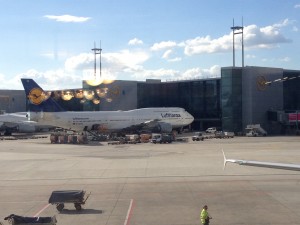 A new Lufthansa 747 (look at the engines) 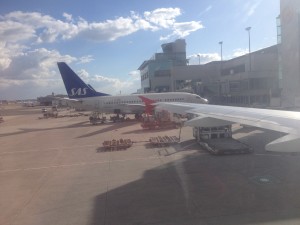 A SAS plane was our neighbour at Frankfurt

Boarding the Austrian plane was efficient sorry no pics but this was also an Airbus 321.

The crew were younger and friendlier than the Lufthansa crew, the seats were exactly the same as on the earlier Lufthansa flight but with an Austrian logo at the top, again the business class seats were identical to economy except with the middle seat blocked.

Service was efficient, the IFE was again my iPad 😉 and as Lufthansa gave me a sandwich, Austrian kindly provided desert, with a choice between chocolate wafer and a non chocolate biscuit, I went for the chocolate option and diet coke. 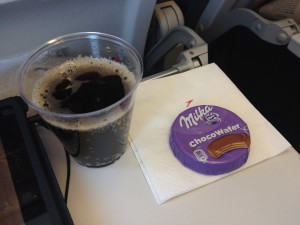 On both the Lufthansa flight and the Austrian flight, electronics were to be switched off during take off and landing, with Austrian still saying this was due to safety despite the recent official evidence to the contrary, and they enforced this.

The flight was enjoyable and pleasant, better than the Edinburgh to Frankfurt leg with Lufthansa but again nothing outstanding to make me stick with Star Alliance for my European destinations but also nothing to stop me flying with them again in future. 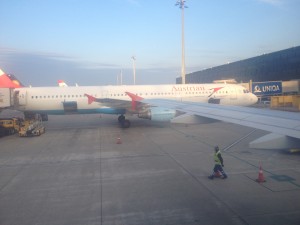 Our neighbour for arrival was a fellow Austrian plane. 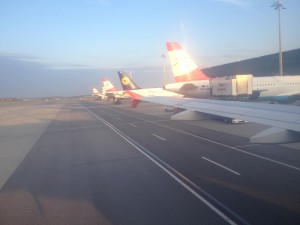 What are your thoughts? Have you flown Austrian for intra-Europe flights? Would you use them again?

It should be noted that whilst everything was branded Austrian Airways this flight was technically operated by ‘Tryolean Airways’.