This trip exposed ‘German Efficiency’ as a myth, the flight was late boarding (Due to a late inbound flight, although we were not told this until after we had boarded the flight), it wasn’t the delayed flight & boarding that prompted the ‘German Efficiency’ comment, but rather after boarding Elite & Business class they wanted to board the rear of the plane first, whilst they enforced this at the gate, they didn’t clear line of those people that didn’t qualify meaning that there were people ‘in line’ who shouldn’t have been.

This meant people who did qualify were joining the back of the long line, only to come forward when the exasparated gate staff called out the rows numbers they were looking for again.

The plane that would be flying us to Frankfurt was an Airbus 321 (D-AISK). 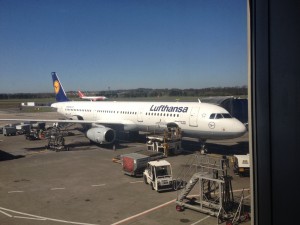 The seats were slimline and the business class seat were identical to economy except that the middle seats were blocked.

After boarding was completed the pilot informed us about the delay (even the screens in Edinburgh didn’t acknowledge a delay) and that this had been caused by the inbound flight being late. The flight crew were very good and kept us informed at key points throughout the flight.

The seat was comfortable enough and sufficient room or pitch between the seats, I wouldn’t want to be in the seats for too long but for short haul they were absolutely fine.

The IFE consisted of my iPad 😉 and crew were pleasant enough but very business like (some German stereotypes are true) and certainly weren’t ‘hosts’ as Luftansa would like to make out. The food service consisted of a Tomato and Mozzarella sandwich (no alternatives were offered) and a complimentary beverage, I opted for diet coke. 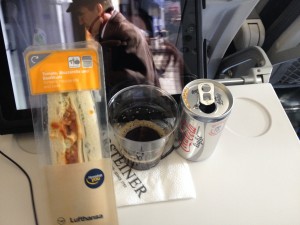 This was served shortly after take off, and the crew gave us ample time to complete eating our ‘meal’ before collecting the rubbish.

Surely Lufthansa could stretch to offering a vegetarian option and a non-vegetatian option in economy?

Overall the flight was pleasant enough, nothing to scream out, always use Lufthansa for my short haul flights but nothing that would stop me using again in future.

What are your thoughts? Have you flown Lufthansa for intra-Europe flights? Would you use them again?